Don't Get Carried Away With The Juice

Juicing has become a popular trend in the health and wellness industry.  While shopping in your local grocery store demonstrations take place of new juicing recipes and machines to make a great tasting juice.   I have been asked many times by clients and friends what is my opinion on juicing.  As with most things, context is important.  Juicing is a healthy alternative to consume the necessary nutrients that the body can benefit from.  Also, people can get carried way with juicing and not have a balanced diet.  The short-term benefits can seem positive, but in the long term depriving your body of essential nutrients is not beneficial.

The Mayo Clinic argues that there is little scientific evidence to support the belief that juice makes vitamins in fruit and vegetables easier for the body to absorb. Eating whole fruit and vegetables is the healthier way to get your daily intake.  Proponents of juicing argue that drinking juice delivers the most nutrient-dense part of the food, in a concentrated form. In a Department of Agriculture study, researchers analyzed 12 fruits and found 90 percent of the antioxidant activity was in the juice, rather than the fiber. In other studies people who drank juices were less likely to develop Alzheimer’s, cancer, or to develop heart disease.
The health benefit of juicing is still up for debate.  Juicing is an easier form to consume multiple fruits and vegetables than on a plate, using utensils, etc.  All of them can be combined in one serving which can be more convenient.  My concern is for those who get carried away with juicing.   Fasting to lose weight or “jumpstart” a weight loss goal.  Many doctors have stated that the first three days, a fast is merely "psychological", causing almost no harm to body or mind. Not eating triggers hunger pangs, but pathology remains unaffected, because the body uses reserves of stored glucose to generate energy. The liver has enough stored glycogen for 18-24 hours of energy.
After 3-4 days many people have difficulty maintaining normal blood sugar levels, and acids start to accumulate. "This happens particularly in people who are underweight or have less body fat, since body fat could also be used as a form of energy. Low blood sugar and ketone bodies will also cause problems in maintaining blood pressure and heart function," said Dr Anoop Misra, Director, Centre of Internal Medicine (CIM), Fortis Hospital.   Most of these kinds of fasts consist of juicing without solid foods, carbohydrates, and proteins.  This can be detrimental to your health in the short and/or long-term.
Anything done in extremes is not good for you physically, spiritually, emotionally, or psychologically.   Your health is no exception.  A balanced diet needs to contain foods from all the main food groups in the correct proportions to provide the body with optimum nutrition.  Your caloric intake should be personalized because every person is different and hence the correct diet may vary from person to person.  Following a diet that is varied, covers all foods groups and is low in undesirable nutrients such as sodium, saturated fats and sugar, you are well on your way to a healthy lifestyle that can include juicing.
Posted by Jamaal Piper at 8:41 AM 1 comment:

This past weekend I was at Grambling State University accepting my late father’s induction into the Sports Legends Hall of Fame as a contributor.   It was one of the most memorable experiences I have ever had.   It has been 13 years since I have been on the campus and seen many friends, classmates, and former co-workers of my father.  He was a 1963 graduate of Grambling and a member of an historical 1961 team that won the NAIA National Championship led by eventual NBA World Champion and Basketball Hall of Famer Willis Reed.  He worked at the University in three different capacities lastly as Athletic Director replacing his former basketball coach Fred Hobdy. 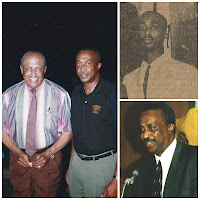 Grambling meant more to him than it just being his alma mater.   While living in Washington, DC he was a very active alumnus and wanted to contribute Grambling anyway he could.  He started the alumni chapter in Washington, DC and organized fundraisers.  Anyone he met that went to Grambling he embraced like he had known them for years.  I always wondered why Grambling meant so much to him, it was more than just being his alma mater.   Hillary Bossier, who was a baseball inductee in the 2013 class, attended Grambling when my father did.  Over breakfast he mentioned he knew my father lost both of his parents before he turned four years old and that he told him that Grambling was family to him.  That brief conversation brought everything full circle for me.  It was bigger than just where he received his college education and why those relationships with many classmates he kept for a lifetime.  Why he took the time to explain the historical context of many of the Grambling graduates and what they accomplished in sports and the impact it had on society.  That regardless of where someone attended college that they could be successful person and contribute to society.
I am a proud graduate of Hampton University and appreciate my experience there more and more over the years.  I must admit from an athletic standpoint no Historically Black Institution has the history of Grambling.  Just sitting at a meeting over the weekend I was in a room with three men who won Super Bowls with Doug Williams (Redskins), Willie Brown (Raiders), and James “Shack’ Harris (Ravens, Executive).  During the banquet Willis Reed (Knicks) and Larry Wright (Bullets) were NBA Champions.  Coach Eddie Robinson won more games than any other college coach when he retired just to name a few accomplishments.  The Grambling “G” has universal recognition from the marching band and success of many of their football teams and players’ success after Grambling.  A truth that many do not like to hear or realize is that athletic success does more to help a university than academic success does to help athletics.  A lesson I learned from my father growing up.   It is well documented that enrollment and revenues increases when athletics are successful, which helps the academics at institutions such as facilities and programs.  Whether you’re a sports fan or not, when your respective alma mater has athletic success there is a sense of pride and accomplishment.    An example is the NCAA Men’s Basketball Tournament.  When a school makes a successful run alumni proudly boast about their school's success.
Over the years since my father has passed I have met people from every period in his life.   All of them loved him and in their own way and appreciated something he did for them.  It could be as simple as calling their child on their birthday every year.  Assisting one of the players he coached make a college choice when they were not even considering attending college before playing for him.  Those that were fortunate to meet him will agree that he was truly one of a kind.  Charismatic, funny, brilliant, and loving are just a few adjectives.   Whether it was his hometown of Rayville, LA or Grambling he never forgot where he came from.  He took me to his hometown to meet people that impacted his life so I could have knowledge of his roots.  I remember one day we were in the store when I was about 10-11 years old and he told me whenever something happened to him that I would know my Daddy.  He kept his word!  Regardless of distance or circumstance nothing came between us and I am forever grateful.
It was appropriate that he was inducted as a contributor into the Sports Legends Hall of Fame because it cannot be quantified.  It was about the legacy left behind and impact on people they will always remember.  It has been almost 14 years since he passed and Grambling has taken numerous steps to acknowledge him.  An Endowed Professorship in the Physical Education Department, Memorial Golf Tournaments, and now Hall of Famer.   My desire is that his induction will inspire others to contribute in their own way to whatever his dear to them and leave a legacy behind because he was truly Hall of Fame worthy.
Posted by Jamaal Piper at 10:05 AM 1 comment:

Do You Know What You're Doing?

Those that are willing exercise consistently have made a commitment in achieving their health and fitness goals.   My observations over the years has been that people are willing to commit to exercising, but do not exercise with purpose.  Which causes me at times to ask the question, “Do you know what you’re doing?” Each workout should have a purpose for a desired result.  It is easy to stick with the same routine over and over again and the fact that your attendance at the gym or class and breaking a sweat is sufficient.
There is not a shortage of fitness professionals, home video systems, boot camps, spin classes, zumba, aerobics, etc. offered.  All of these resources are very helpful.  All of them should have a purpose along with a healthy balanced diet that is tailored toward your goals.   Factors such as body type, genetics, nutrition, and types of physical activity should dictate what your goals are and the approach that should be taken.  Also, evaluating your schedule and plan what times and locations are best to workout.  For example, if there are only certain days of the week you can get to a gym for strength training do your cardio vascular exercises at home or outside.
When approaching strength training there are many approaches to take.  Heavy weight, low reps, lighter weight, higher reps, circuit training, and/or combinations of them all.   Low repetitions with high weight increases strength, whereas high repetitions with low weight increases endurance. According to the concept, as repetitions increase there is a gradual transition from strength to endurance.  Splitting your strength workouts is beneficial.  I am a proponent of push/pull splits.  Pushing exercises involve the quads, calves, chest, shoulders and triceps. Pulling exercises include back, hamstrings, some shoulder exercises, biceps and abs. A push/pull split can be a combination such as chest/back and biceps and triceps for the upper body.  These are just examples of the many ways to split your strength workouts.
In terms of cardio vascular exercise intensity and calories burned should be your focus more than time.  The first thing that comes to mind with cardio in most instances is long jogs and hours on an elliptical machine.   High Intensity Interval Training (HIIT) is another form of cardio that involves alternating between very intense bouts of exercise and low intensity exercise. For example, sprinting for 30 seconds, then walking for 60 seconds is high intensity interval training. HIIT can be used both anaerobically (in the gym with weights) and aerobically with cardio.  Whatever form of cardio you choose look for ways to improve and increase the intensity, never get complacent.
The fitness industry is oversaturated with programs and concepts of what is the best way to train to reach fitness goals.  That is why it is important to gain the knowledge of what works best for you.  Regardless of how knowledgeable a person is the learning process never stops.  New forms of equipment and combinations of workouts are consistently being designed.  In some instances it is trial and error.  Even during that period every workout should have a purpose.  Take the time to learn the purpose behind exercises and routines. The greatest training sessions can be ruined with poor nutrition the rest of the day and week.  That is why as fitness professionals we stress the importance of the entire process. This will equip you to reap the benefits of consistently exercising and having proper nutrition.  Then you will know what you’re doing.

Posted by Jamaal Piper at 7:04 AM No comments: