You Can't Afford To Stop

Starting and keeping up a healthy lifestyle can be challenging.  In some instances the goals can be superficial.  Other times it is health related.  Layoffs can happen due to injury/illness, stress, and/or being overwhelmed with responsibilities.   But you have the opportunity to get back on track.  Don’t deceive yourself, it will be challenging.  You must have the perseverance and consistency to press through.  Strength and conditioning will not maintain on its own.  There is never room to be complacent.

If you have taken a long layoff from exercising how did it feel once you started back?  Did it feel like the first day?   The time invested in being active was building a foundation of strength and conditioning.  Time off will impact both.   Many studies have been done to track what happens to the body once a person stops training.

Intensity plays a major role in how much our exercise induced adaptations are reversed over time, both in terms of strength and endurance.  The more intense your workouts were, the more you retain when you stop training, even for prolonged periods of time.

As we age continuing to stay active becomes imperative to function at a maximum capacity.   “We lose so much muscle as we age that by the time we’re 70, we only have about 50 to 55 percent of our muscle mass left,” says Beatrice Edwards, M.D., M.P.H., associate professor of medicine and director of the Bone Health and Osteoporosis Center at Northwestern University Feinberg School of Medicine. “That explains why we feel weak and tired as we age, and we can prevent some of that with weight training.”

Cardiovascular fitness is related to age, gender, exercise habits, heredity and cardiovascular clinical status. Maximum values occur between ages 15 to 30 years, decreasing with age. At the age of 60, the mean maximal aerobic power in men is approximately three fourths of that at the age of 20. With sedentary lifestyle, there is a 10 % reduction in the mean maximal aerobic power per decade, the reduction with an active lifestyle being less than 5 %.

Studies have shown that weight lifting can prevent bone loss and may even help build new bone. In one study, postmenopausal women who participated in a strength-training program for a year saw significant increases in their bone density of the spine and hip, two areas affected most by osteoporosis in older women. Developing a strength and balance/stability program, especially targeting the hips and core, can help prevent falls with these women.

Continuing strength training with age will assist in performing your daily tasks and enjoy recreational activities.  Strength can serve as the fountain of youth.  It is combats the age-related declines in muscle mass, bone density and metabolism. It is an effective way to increase muscle strength and to shed unwanted inches. Strength training also helps to decrease back pain, reduce arthritic discomfort, and help prevent or manage some diabetic symptoms. 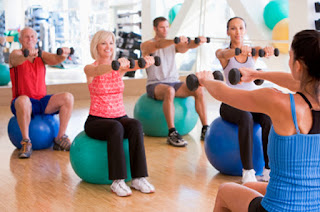 Remind yourself why you are staying active.  Besides all the aesthetic benefits it is more important to keep going for overall health.  The quality of your life depends on it.
Posted by Jamaal Piper at 3:26 PM No comments: 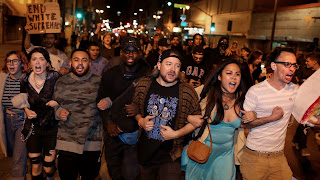 Tomorrow the 45th President of the United States Donald Trump will be sworn in.  Needless the say this past election has stimulated a wide range of emotions.  I attended the inauguration eight years ago when President Barack Obama was elected.  It was a very cold day, but I could feel the excitement and optimism.  My thoughts at the time that his presidency would stoke the best and worst of the country simultaneously.

The fact that he was elected and excitement surrounded it represented the best.  The clear resentment from some and how that would play out were my concerns.  It was later reported that on the night of Barack Obama’s inauguration, a group of top GOP luminaries quietly gathered to create the outline of a plan for how to deal with the incoming administration.  After three hours of strategizing, they decided they needed to fight Obama on everything. Obama had no idea what the Republicans were planning.

I have grown increasingly frustrated with partisan politics.   I’m displeased at both major parties throwing labels at each other.  The left this and the right that.  Our society has evolved and people do not care to be put in a box regarding how they view issues.  The Republicans have become nauseating.  As a black man living in this country the lack of acceptance and understanding of issues pertaining to minorities is plainly obvious.  It’s so sad that I can listen to a politician holding office, surrogate, or political commentator speak on any issue and know their political affiliation before a "D "or "R" appears on the screen next to their name.

The Republican party would be the party that would have a Donald Trump win their nomination and the appointments he has made such as Jeff Sessions as Attorney General with his track record on civil rights issues, Dr. Harry Carson for HUD with no experience in housing, or Betsy Devos for Secretary of Education with no experience in public education.

For Donald Trump to have a campaign slogan “Make America Great Again” and that not be offensive to all Americans with our history was very disappointing.  Again means we want to go back to something.   What is that?

“I’m actually old enough to remember the good old days, and they weren’t all that good in many ways,” he said at a rally in Orlando. “That message where ‘I’ll give you America great again’ is if you’re a white Southerner, you know exactly what it means, don’t you?”

Karen Tumulty of the The Washington Post reminded us how Ronald Reagan and George H.W. Bush had used “Let’s Make America Great Again” in their 1980 campaign.

I was frustrated with the Democratic Party with its insistence that Hillary Clinton be the nominee.  As it became apparent with the email hacking to suppress Bernie Sanders that they didn’t want her to have strong opposition.  After winning the nomination her complacency in not visiting a state such as Wisconsin on the campaign trails was costly.  I was concerned about Clinton fatigue since her and husband former President Bill Clinton have been in the public eye for so long that voters were just tired of them.

The Democratic party’s lack of identity and leadership is evident.  I’m more confident that they are the party that is more reasonably minded and acknowledge the issues that face this country.  They are more inclusive with diversity in leadership.  If the midterm elections during President Obama’s two terms were not a wake up call, Trump’s election better be.

The last eight years I have paid closer attention to local elections.  I’ve always voted when a local offices were at stake, but with many of the events that transpired across the country I’ve gained more understanding of how important those officials are.  Many of the issues that we are not pleased with start at the local level.

Donald Trump is a win at all cost person.  Over the years there have been stories on his business dealings and the damage he has left behind.  He saw an opportunity to tap into those that never wanted President Obama to be elected and those that did vote for him who were not pleased with their circumstances after his two terms.

Alexandra Pelosi did a documentary during the 2008 campaign, “Right America:  Feeling Wrong”.   Pelosi visited 28 states and spoke about the fight for the soul of the country with mostly conservative Americans, who feel underrepresented by the mainstream media.

"The way the press handles the election, we feel like our side's never being really represented, never really given a fair shake," says one man. "It's almost like they think of us as a bunch of hicks, a bunch of idiots. And they don't even wanna hear our side or understand us."

With the growth of social media we have a platform to express our feelings on anything we choose.  It has exposed issues such as police conduct with killings and incidents being filmed and posted.  At times I’ve read comments from articles and post and it is clear we are a divided country.

The division in the United States provides an opportunity.   Whether a person chooses to share their feelings on social media is a personal choice.  But what can’t be avoided is acknowledging the current climate.  We all must take a position.  I’ve heard stories and witnessed of how Trump’s campaign and election has caused strain in relationships between friends and families.  What has been internalized in the past is now more openly communicated.

It is not fair to paint all Trump supporters with a broad brush.  But his bigoted, sexist, and xenophobic rhetoric was not a deal breaker.   If Trump was a minority or woman he would not have gotten pass the first primary with his comments and tweets of all those he offended.

I’m past getting upset with politicians, celebrities and entertainers who reveal their position on a multitude of issues.  Thanks for letting me know.  We need to be the change we want to see and continue to fight for what is right and just for all.   It is time to take a stand.  I’m seeing the signs and hope it will continue while he is in office.
Posted by Jamaal Piper at 9:23 AM No comments: 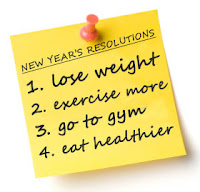 It is a new year, 2017 is here.  A popular resolution is to lose weight, get healthier, take it to another level, etc etc.  The New Year provides an opportunity to reset and start all over again.  The change in the calendar does not change the ingrained habits that leave many us unhappy.  How did you get there?  When did it start?  How can you get back on track or on track period?

Timothy Pychyl, a professor of psychology at Carleton University in Canada, says that resolutions are a form of "cultural procrastination," an effort to reinvent oneself. People make resolutions as a way of motivating themselves, he says. Pychyl argues that people aren't ready to change their habits, particularly bad habits, and that accounts for the high failure rate. Another reason, says Dr. Avya Sharma of the Canadian Obesity Network, is that people set unrealistic goals and expectations in their resolutions.

As a fitness professional it is discouraging to see the amount of quick fixes and products advertised as if there is a shortcut.  All of them are not bad, but feed on unrealistic expectations.

Most people view lack of exercise as a motivational problem, therefore the issue needs to addressed is to create and facilitate that ‘missing’ motivation.  However, research has shown that it is not the lack of motivation that acts as a deterrent to exercise, but rather counter-motivations that prevent an individual from exercise participation (Richetin, Conner & Perugini, 2011).  “Life” gets in the way.  Many of us struggle with work/life/family balance.  In order to be better equipped to deal with stress and responsibility taking care of yourself should be on the top of your priority list.

I recently read an article “13 Things You Should Give Up If You Want To Be Successful”.  The first item on the list, “Give Up An Unhealthy Lifestyle”.  Physical activity plays a key role in reducing and preventing the effects of stress.  You don’t have to train like a professional athlete to experience the benefit.

Our bodies were meant to move.  A healthy lifestyle reduces the risk of heart disease, cancer, high blood pressure, diabetes and other diseases. It can improve your appearance and delay the aging process.   If you desire to be healthier or more consistent with healthy habits I challenge you to list of your obstacles and then a solution to each of them.  Feel free to contact me for assistance.
Posted by Jamaal Piper at 6:43 AM No comments: