Bernard Hopkins this past weekend once again made history by maintaining his record as being the oldest boxer to hold a championship by unifying the IBF/WBA light heavyweight championships at 49 years old defeating Beibut Shumenov (30 years old).  It has been remarkable to witness someone at his age flourish in a sport as brutal as boxing.    "I'm special, in a way that is good," Hopkins said. "I don't have to explain special. There is no definition for special. Special speaks for itself. I had a great night. I am a great champion."

Hopkins is an example of the quality of life and productivity a person can have by adopting a healthy lifestyle.  For over 20 years Hopkins has maintained a very strict diet and consistent workout regiment.  As reported by Bernard Fernandez of the The Philadelphia Inquirer in 2011 as Hopkins was preparing for a bout against Jean Pascal, his only indulgence is an occasional cheesecake.    "I feel good. My reflexes are not perfect, but there's no noticeable drop-off. I do wake up a little later now than I normally would. I get up around 7, stretch, get out on the road and do my running around 9. I used to get my roadwork in before the sun came up.”

Renowned trainer Mackie Shilstone worked with Hopkins in 2006 to prepare him to move up two weight classes from middle weight (160 lbs) to light heavyweight (175 lbs) to challenge then champion Antonio Tarver.  Hopkins won the fight and working with Shilstone was an example how serious he was about moving up 15 lbs for his fight.  He wanted to do it the right way, not by eating junk food and slowing him down against an opponent who was more comfortable at that weight.

Shilstone told ESPN.com in 2006, "When a man wants to leave a mark on society, I don't have to guess if he is going to train hard. He's taking on a bigger, younger man who is on top of the mountain. This is the ultimate challenge in sports. It makes winning the Super Bowl look like child's play."

You don’t have to be an elite athlete as Hopkins to appreciate the benefits of adopting a healthy lifestyle and being efficient in everything you do at an age when people feel you should be slowing down.  The Harvard Study of Adult Development, the longest, most comprehensive examination of aging ever conducted concluded from their studies since the 1930’s that socializing, healthy lifestyle of exercise and nutrition, and continuous mental stimulation are some of the “secrets” of aging well.

The results haven't always been what even the investigators themselves anticipated. "I had expected that the longevity of your parents, the quality of your childhood, and your cholesterol levels would be very influential," says psychiatrist George Vaillant, MD, director of the Harvard study and senior physician at Brigham and Women's Hospital in Boston. "So I was very surprised that these particular variables weren't more important than they were."

According to Vaillant, is something like being tickled -- it's best achieved with another person. Whether your social connections are with a spouse, offspring, siblings, bridge partners, and/or fellow churchgoers, they're crucial to good health while growing older. 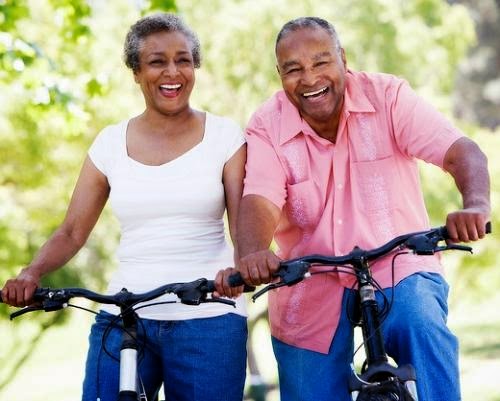 Shilstone has worked with over 3,000 athletes and currently Serena Williams rates people in three categories.  Chronological age, which you can't do anything about. Your 'health' age, which relates to your internal chemistry, such as percentage of body fat, triglycerides and other measurables. And then there's 'performance' age. Shilstone is on record stating that Hopkins is as close to a perfectionist with nutrition as anyone he’s ever dealt with.

Products can assist with aging process, but they cannot replace the choice to adopt better habits.  Cholesterol, blood pressure, weight, and other health issues usually trace back to nutrition and exercise.   How many times have you heard a doctor tell you and/or a friend or relative to improve their eating habits and exercise more because of health concerns?   So the next time you see a person like Bernard Hopkins at 49 maintain his weight for his entire adult life, he doesn’t have a secret that no one else can get their hands on to look and feel healthy.  He made a choice, the same one you can make to take care of his body and be mindful of what he puts into it and how he treats it, make the necessary adjustment with age without stopping because of it.

Physical activity is essential to prevent and reduce risks of many diseases and improve physical and mental health.   Lack of physical activity is attributed to anxiety, stress, and depression.  The authors of the Lancet studies even suggest that the sedentary lifestyle so common in our culture is more deadly than smoking. They also believe that 6-10% of the world’s non-communicable diseases (such as heart disease, diabetes, and certain kinds of cancer) are caused by physical inactivity.

Utilize the many resources of healthy meals and exercise programs.  If you do not know what steps to take consult a professional to assist with a designing a plan.  The marketplace is oversaturated with products and concepts that can be overwhelming.  I’ve seen people well intended, but not working efficiently.  Learn what to do that fits your current health and conditioning level and make the adjustments.  Many of the ingredients for longevity are in your control.

Posted by Jamaal Piper at 11:12 AM No comments:


The Masters begins today and Tiger Woods absence is a major part of the discussion surrounding the event.  Arguably the most transcendent athlete post Michael Jordan, his participation draws higher ratings and intrigue to any event he participates in.  Woods currently has 14 major championships; he has not won a major since the 2008 U.S. Open.  Knee surgery, a sex scandal, age and other injuries including back surgery which currently has him sidelined are making prospects of him breaking Jack Nicklaus’ record of 18 major championships more difficult.  Last week ESPN’s “First Take” discussed the lack of black golfers at the professional level.  Finances are a major factor, but there are others as well.

Tiger Woods winning his first Master’s in 1996 was an historical event.  Following that win Woods continued his dominant play for many years and his influence on the golf and society were transcendent.  He inspired people of all ages, race, and classes to pick up the game of golf.  Nike’s golf division was built on Woods’ impact.

When the question was posed on “First Take” last week some may be surprised after giving it thought that more minorities are not playing golf at the professional level.  Personally, I am not for many reasons, the most obvious being the cost of the game from equipment, lessons, and green fees.  Other factors that were not discussed on the program are the role of parents.

Golf is a game that requires master coaching to become successful.  It is taught more than caught.  It is safe to say that the majority of golfers we will see this weekend at the Masters were taught the game by their fathers.  In those instances their fathers were very good golfers who had the resources for additional instruction and practice rounds on difficult golf courses.

In my opinion in could take a generation before more minority golfers at the professional level.  The generation of minorities Tiger Woods inspired have to become parents and teach their children the game.  It has been 18 years since Woods history making win at the Masters, that is not enough time for that impact to be felt.

The First Tee Program, an initiative of the PGA Tour and the World Golf Foundation in 1997, a year after Woods historical Masters victory, is designed to create affordable and accessible golf facilities, with an emphasis on serving kids who have not had access or exposure to the game.  Hurdles for economically disadvantaged children and minorities picking up the game are places they could physically get to, and places that they could afford.  As great as the program is it cannot replace the role of a parents involvement.

Learning to play golf is similar to learning how to play an instrument.  Observing someone else and attempting to do it yourself is not sufficient to become successful.  Someone who understands the golf swing, etiquette, and idiosyncrasies of the game has to give instruction in addition to of hours of practice.   In most instances with golfers at the professional level their fathers laid that foundation.

It has been six years since Tiger Woods won his last major tournament.  At the time he was 32 years old with 14 majors and it appeared to be a foregone conclusion that he would surpass Jack Nicklaus record of 18 major championships.  With knee surgery following his U.S. Open win in 2008 and the sex scandal that followed later in the year and early into 2009 he has not been the same golfer even winning five events last season.

Woods was one of the few golfers very open about his dedication to fitness.  With his success more golfers took their fitness seriously and now there are 1,000 sq. ft. fitness trailers at events.  Golfers have swing coaches and personal trainers.  Upcoming golfers who were inspired by Woods are now in there 20’s establishing their own careers and having success such as Rory Mcllroy.

After his injury and scandal Woods did not have immediate success.  He showed vulnerability.  My belief is his inability to compartmentalize his personal issues carried over into his performance on the golf course.

Other marquee golfers when asked about Woods absence this week have acknowledged that the tournament will not be the same.  This is the first Masters without Woods since 1994.   Phil Mickelson stated, “"It's a weird feeling not having him here, isn't it? He's been such a mainstay in professional golf and in the majors. It's awkward to not have him here. I hope he gets back soon."

There isn’t another golfer on tour who is “must see TV” like Woods.  The game does not have another polarizing figure that can attract casual fans to the game.  Fans hold on to the dominance that he is six years removed from.

Woods will soon return from back surgery.  Jack Nicklaus recently stated that he feels Woods has time to break his record.  "I feel very bad for Tiger. He's really worked towards my record," Nicklaus said. "I still think he'll break my record.”

"As long as he is physically able to do it ... He's 38 years old and he's probably got another 10 years at least of being able to compete -- that's 40 more majors to win five of them. It shouldn't be too difficult."

What will be difficult is another physical setback, a deep field of competitors, age, and loss of mental edge that he will not be able to regain unless he’s dominant again for a significant period including winning major tournaments.  Woods does have time, but it is not something he should take for granted or us as fans assume is enough for him to break a record he has set his sights on.

Posted by Jamaal Piper at 4:24 AM No comments: