The PED User In All Of Us

Robert Mathis of the Indianapolis Colts was recently suspended for four games for testing positive for a banned substance.  He admitted to taking the fertility drug clomid, which is on the NFL’s banned substance list and considered a performance enhancing drug (PED).  Dr. Steven Morganstern, the urologist who prescribed the drug to Mathis, also backed up Mathis' claim he took the drug only for fertility purposes.  Regardless of the unique circumstances the NFL was unforgiving suspending him, especially since he did not follow the proper protocol before taking the drug.

Mathis' agent on Monday accused the NFL of misleading the public with its statements on the drug his client used that resulted in the Colts linebacker's four-game suspension and questioned the league's unwillingness to adjust the penalty.

Those serious about their health and wellness take supplements that have been proven to be beneficial.  Many of these athletes who have tested positive for banned substances start with pre-workout energy drinks, protein shakes, glutamine (recovery), and creatine (strength and power).  These are all taken for health benefits and to assist for intense training sessions.

Caffeine is most commonly used to improve mental alertness, but it has many other uses.   It is also used with painkillers for simple headaches and preventing and treating headaches after epidural anesthesia.  Some people use caffeine for asthma, gallbladder disease, attention deficit-hyperactivity disorder (ADHD), shortness of breath in newborns, and low blood pressure. Caffeine is also used for weight and type 2 diabetes. Very high doses are used, often in combination with ephedrine, as an alternative to illegal stimulants.

USA Today reported in 2013 that about 83 percent of adults drink coffee in the U.S., the world's biggest consumer of the beverage, up from 78 percent a year earlier, according to the National Coffee Association's 2013 online survey.

I was recently in the locker room at my local gym and an older gentleman was discussing how he could only exercise for 30 minutes before he became fatigued.  At his yearly physical his physician checked his testosterone levels, which were low.  After taking testosterone, which his doctor prescribed he mentioned how he can workout for an hour and feels so much better.

When it comes to performance enhancing drugs it is a very thin line between what is actually enhancing performance and speaks how we all look for an edge mentally and or physically, not just elite athletes.

Adderall has been an issue in the NFL during recent years. In the last two years, more than a dozen players have been suspended for using Adderall or Ritalin, which are regularly prescribed for ADHD.

Adderall is known as a popular study drug among college students, and that trend has leaked into the realm of professional sports. It is classified by the NFL as a performance-enhancing drug and as a drug of abuse.

After feeling and seeing the benefits of these products athletes’ fall into the temptation knowing that there is another level and can only imagine what can be accomplished if they take the next step.   In other circumstances it is because of an attempt expedite the recovery from an injury.  A college student with pressure to perform well in the classroom will take a drug such as Adderall.   The professional with long work hours will drink sodas and energy drinks with high levels of caffeine to stay alert while performing their task.

Dr. Jay Granat, renowned sports psychologist mentioned 10 reasons he feels athletes turn to steroids.  One of the reasons he mentioned is that there is a widespread and prevalent culture of cheating which is prevalent in sports, business and relationships.  In some instances these athletes turn to banned substances to help manage feelings, problems, and stress.

The gentleman from the gym use of testosterone was for medical purposes.  Athletes have abused testosterone to gain the same benefits as the gentleman at my gym.  In return, with more intense training athletes can before better in their respective sports and are less prone to injury.

Testosterone is a naturally occurring hormone that helps regulate bone density, fat distribution, muscle strength, red blood cell production and sex drive, according to the Mayo Clinic. It is found in both men and women.

In professional bodybuilding it is not a secret that steroid use is prevalent.   Prominent bodybuilding competitors from legendary Arnold Schwarzenegger, Ronnie Coleman, and Jay Cutler have admitted to steroid use in their bodybuilding careers.  A seven-week cycle and improve your muscle gains by up to 20%.  Certain competitions distinguish themselves by being labeled “Natural” because they test for steroids and other drugs at their competitions.

Track and Field has a long history of PED use.   At the Olympics in 1988 when Ben Johnson upset Carl Lewis in the 100m final, six of the eight finalist at some point in their careers were implicated in doping scandals, including Lewis, who it was later revealed had tested positive for stimulants at the US Olympic trials that today would not result in a suspension.

Seven-time Tour De France winner Lance Armstrong finally admitted to his elaborate use of PEDs in 2013.  Armstrong admitted to Oprah Winfrey in an interview in January 2013 of using EPO, testosterone, cortisone, human growth hormone, illegal blood transfusions and other blood doping.   Cyclists and other athletes use EPO to raise their red blood cell counts, which increases the amount of oxygen that can be delivered to muscles, improving recovery and endurance.

The public has been harder on the Lance Armstrong and other athletes because of their constant denials and the mounting evidence against them for years.  We have been forgiving of baseball player Jason Giambi and Olympic gold medalist Marion Jones because of how they handled their respective situations even with Jones serving a six-month prison sentence for lying to federal authorities regarding her steroid use.

Those developing the supplement programs for athletes are several steps ahead of the tests even with stricter drug testing in all of professional sports.  It is difficult to quantify who is taking banned substances and who is not.

Studies have shown an increase in teenager boys steroid use to become bulkier and for self esteem issues.  Researchers believe that media, as well as peers, particularly older adolescents, are major influences on dangerous behavior among young teens.

These studies highlight the often underreported issue of distorted body image among adolescent boys,” said Aaron Blashill, PhD, staff psychologist at Massachusetts General Hospital and faculty member at Harvard Medical School. “Teenage girls tend to internalize and strive for a thin appearance, whereas teenage boys tend to emphasize a more muscular body type. We found that some of these boys who feel they are unable to achieve that often unattainable image are suffering and may be taking drastic measures.”

Sports are a microcosm of society.  Cheating takes place in business, politics, relationships, and just about everywhere else you look.  A survey by CFO Magazine found that 20 percent of financial executives feel more pressure since 2001 to “make results appear more favorable.” In a recent survey of students at the nation’s top business schools, two-thirds of women and more than half the men said they do not believe that most companies are “run honestly or ethically.”

Without realizing it many of us turn to some form of drug or stimulant for improved performance mentally and physically.    Excessive use of many of these drugs can lead to psychological and physical damage.  Drugs or supplements prescribed by a doctor are under close monitoring to address a medical issue.   Before taking any supplement over the counter ask a professional the purpose of the supplement and proper dosage, many of those drugs and supplements are not regulated by the FDA.  Taking some of them responsibly can be beneficial for your health.  Whether we realize it or not most of are taking something!

Jamaal Piper
Personal Trainer and Health and Wellness Consultant
www.piperpersonaltraining.com
Posted by Jamaal Piper at 9:39 AM No comments:

Misleading food labels continue to fool consumers with keywords and bold statements that feed into people’s dietary needs and weight loss goals. This doesn’t mean all food labels are lying when they state they are “fat free” or made with “real fruit,” but what about the other nutritional facts or ingredients?  Manufactures know that stating that part of the ingredients will lure consumers to purchase their foods because of the trend of being health conscious.  Unfortunately, the FDA does not regulate all food labels and cannot keep food manufacturers from using clever wording to avoid a potential lawsuit. What you can do is read the entire label of nutritional facts and ingredients list to find the truth behind the fancy wording and manipulative marketing. 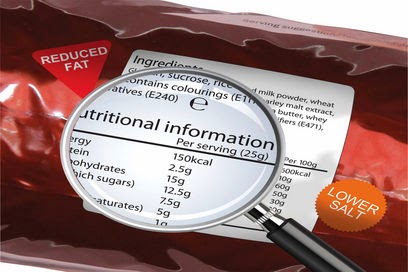 A study published in the journal Appetite in 2013 fed subjects’ identical meals on separate occasions.  The information they received about the meals differed.  One was said to be lower in fat and calories than the other.  The research found that men consumed on average 3% more calories when consuming the meals they believed to be low fat.  Food labels as much can cause you to increase what you are eating because of the assumption of what the appropriate serving size should be.

Processed foods will lead to larger waistline and it is easy to fall into a trap because of what is in bold print such as “fat free” or “low fat”.  When companies alter processed foods like cookies salad dressings, peanut butter, and fruit yogurt they add sugar to compensate for taste.  Stick with the real deal and leave the guessing out of your food choices.

Some food choices have the perception of being healthier.  For example turkey burgers are often chose over a regular hamburger for health reasons.    According to Kathy Geagan, author of Go Green, Get Lean turkey does have less saturated fat.  In terms of total fat and calories, the two meats can be virtually identical unless the patty is made with 93 percent lean meat.

According to USDA, “Natural” meat and poultry products cannot contain artificial colors, artificial flavors, preservatives or other artificial ingredients, and they should be minimally processed. However, “Natural” does not tell us how the animals were raised, what they were fed, if antibiotics or hormones were used, or other aspects of production that consumers might logically expect from something labeled “natural.”  The label “Fresh” is used on poultry to indicate that the meat was not cooled below 26 degrees Fahrenheit (six degrees below freezing). Poultry does not have to be labeled as “frozen” until it reaches zero degrees.

“Raised without added Hormones” in PORK or POULTRY. Federal law prohibits the use of hormones for hogs and poultry, so the use of hormone-free labels on pork and poultry products intentionally misleads consumers by claiming that the product is different and therefore worthy of a higher price.

Labels are misleading to consumers to convince them that they are paying more for health benefits, when in some instances they are the same if it did not have the label.  When purchasing any foods with labels, read the fine print.  That will tell the story of what you are actually purchasing, not what is in bold print on the front.

Jamaal Piper
Health and Wellness Consultant
www.piperpersonaltraining.com
Posted by Jamaal Piper at 9:53 AM No comments: